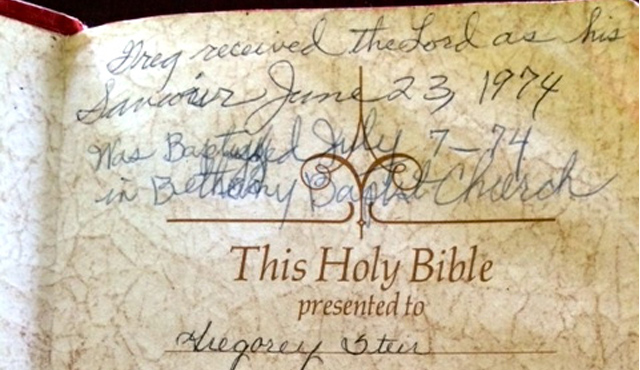 40 years ago today I was adopted into God’s family. One June 23, 1974 at noon straight up I put my faith in Jesus. I remember it like it was yesterday.

I often talk about my family of body-building, tobacco-chewing, beer drinking thugs but I don’t share as often about my strict Baptist grandparents. They had raised six fist-fighting kids in the toughest part of North Denver, a part of town known for it’s thuggery.

To be honest I think my grandparents felt guilty for how most of their kids had turned out (especially in their younger years.) They loved their five boys and singular girl (my mom) but these kids were not Baptists as much as they were butt-kickers. When the organized crime sector knows your uncles as “the crazy brothers” you can be sure you are being raised in a tough family.

So, out of fear of me turning into a hellion they took me to church religiously when I was very young. It was there Pastor Claude Pettit explained to me the good news of Jesus and I was transformed.

I’ll never forget it. Sitting in the small chapel at Bethany Baptist Church during the altar call time I nudged my grandpa and whispered to him that I wanted to go forward to be water baptized. I had asked Jesus into my heart a thousand times and, although I had no clue what that meant, I figured one of them had to take. In my mind it was time for the next step of water baptism.

Nervously I pushed up from the creaky wooden pews and slowly walked with my grandpa toward the front of the tiny sanctuary as the hymn played on. Pastor Pettit welcomed me with a twinkle in his eyes and a smile on his face. Once up front he asked me,

“Why are you here this morning young man?”

“To be water baptized” I responded.

“Being baptized is only for those who believe that Jesus died for them on the cross and are trusting in him alone to save them. Have you done that?” he asked.

Suddenly it all made sense. Suddenly I understood that what my Sunday school teachers had meant by “asking Jesus into your hearts” was actually putting our faith in Jesus to save us.

“Yes!” I answered with a jolt of excitement.

He had no idea that he had just led me to a saving knowledge of Jesus. I glanced at the clock as he presented me to the congregation and it was straight up noon.

Tucked between my grandma and grandpa in our Ford F150 truck on the way home I told my grandma what had just happened. She wasted no time and wrote down, “Greg received the Lord as his Saviour June 23, 1974.” She penned these words in the front of my little red King James Version bible given to me by my Sunday school teacher, Mrs. Luella Muirhead ten months earlier.

For ten months I scoured that little Bible looking for salvation. The violence I saw in my immediate family made me long for it. I wanted a way out and I knew that the way was in Jesus. But what that exactly meant I had no idea…until that warm Colorado Sunday.

People ask me why I’m so passionate about the clear gospel of grace. They ask me why I’m such a stickler when it comes to terminology and theology surrounding how a person becomes a Christian. And I take them back to the story of my salvation.

Thank you Lord for your gift of salvation! I praise you from the depths of my soul at the amazing gift you gave me through your servant Claude Pettit forty years ago today!

“Oh, the depth of the riches of the wisdom and knowledge of God! How unsearchable his judgments, and his paths beyond tracing out! Who has known the mind of the Lord?
Or who has been his counselor? Who has ever given to God, that God should repay them? For from him and through him and for him are all things. To him be the glory forever! Amen.” Romans 11:33-35