What a dead missionary can teach us about radical youth ministry 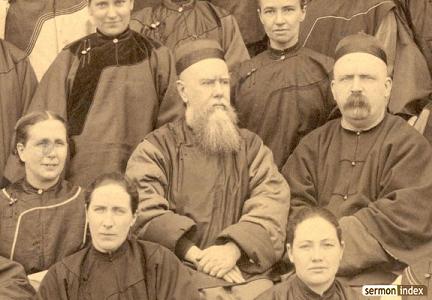 Although Hudson Taylor was born in 1832 and died in 1905 he has a lot to teach us about youth ministry in this postmodern world. The principles he learned over the decades and eventually passed along to the young missionaries he recruited can help us reach the next generation today. But we must apply these timeless principles with the right mix of wisdom, gentleness and courage in our own youth ministry contexts.

Taylor became a Christian at the age of 18 and, by 21, became a full-blown missionary to China. Although he provided medical help to the Chinese as he shared the gospel with them he was (along with all the other English missionaries of his time) roundly rejected and ridiculed. Often called “Black devils” for their long, black overcoats the English missionaries were despised by many of the Chinese people.

As Hudson evaluated what other missionaries were doing he was severely disappointed and disillusioned. He realized that many of them were using their second language skills to help wealthy businessman transact lucrative deals instead of proclaiming the gospel. When many of these missionaries did actual ministry among the Chinese it was often with an air of English superiority. They spoke down to the Chinese “heathens” and then sipped some more tea as they huddled to console each other in their safe and comfortable “missionary training centers.”

But Hudson was a different breed of Englishman than the prissy missionaries he was working alongside in China. Unlike them, he wasn’t there to get rich but to get souls. He wasn’t concerned with earthly comfort but with eternal salvation. His heart broke for the Chinese who knew nothing of Jesus, his death and the grace available for all who simply trust in Him.

So Hudson did something radical. He adopted Chinese dress, grew a long ponytail, dyed it black and shaved the rest of his head bald (like the Chinese men did!) Although other missionaries mocked him, he took radical action to reach the unreached Chinese. When he did the walls of Chinese apprehension fell and the gospel began to make an inroads into China in a serious way.

So what does all of this have to do with your youth ministry? What lessons can Hudson Taylor teach the average youth leader about youth ministry? There are at least 3 lessons he can teach those of us trying to reach the unreached people group called teenagers today:

1) Do whatever it takes to reach them!

Hudson Taylor was so focused on reaching the unreached Chinese that he was willing to forsake the benefits he had become accustomed to and live completely by faith. He endured sickness, bouts of depression, struggles with Chinese authorities, dangerous riots and searing criticism by fellow missionaries all so the gospel could spread.

In the same way youth leaders who are willing to engage their own trials for the sake of reaching teenagers will (eventually) see the blessing come. Their trials may come in the form of apathetic teenagers, lame youth rooms or youth ministry budgets that have been unfairly slashed. But whatever the trials these youth leaders, fueled by the same Spirit who empowered Hudson, will prevail. Lives will be changed, souls saved and communities transformed as a result of their “whatever it takes” attitude.

2) Raise up an army of young fanatics to help you reach even more teenagers.

Perhaps the most impacting part of Hudson Taylor’s efforts didn’t happen in China but England. He traveled back to his beloved home country several times to preach and recruit young men and women to join him in his missionary efforts. He poured into young people and taught them to live by faith and forsake everything else for the glory of God and advancement of His kingdom. Hudson said, “China is not to be won for Christ by quiet, ease-loving men and women … The stamp of men and women we need is such as will put Jesus, China, [and] souls first and foremost in everything and at every time—even life itself must be secondary.”

During his lifetime Hudson’s efforts raised up an army of 800 young radicals who lived by faith, preached the clear message of God’s grace and invaded every province of China with the good news of Jesus Christ. He was directly responsible for 18,000 Chinese disciples being made during his lifetime. Their efforts became the foundation for the explosive growth of the church in China today.

Youth leaders who learn to subjugate personal comfort for this compelling cause will get a taste of the power of this approach. And these same radical youth leaders must raise up radical teens within their youth groups who can be equipped and unleashed to reach others. These “10%ers” will do what it takes to reach the lost at any cost on their school campuses and in their communities.

Hudson operated in utter dependence on God through prayer. He once said, “All God’s giants have been weak men, who did great things for God because they believed that God would be with them.” God uses weak youth leaders who become giants through prayer. When we realize that we can’t but He can then we begin to experience the truly miraculous in our ministries.

Are you, like Hudson Taylor, operating in utter dependence on God through prayer in your youth ministry? Are you more dependent on that latest curriculum or resource to prepare your lessons than the Holy Spirit to convict and convince your teens? Are you laboring with God in prayer for the lost teens in your community? Are you getting your teens, especially your 10%ers, to agonize over the lost with you?

Let us learn from Hudson Taylor. Just as Hudson left the English niceties to adopt Chinese dress and customs, let us leave any lame youth ministry practices behind and embrace a radical, mission-driven approach to discipleship that calls teens to a higher cause, THE very Cause that Jesus left to his disciples. We may be mocked by some in the youth ministry community. We may be marginalized by some people, even in our own churches. But it’s worth it if just one teenager passes from death to life.

May the Spirit that filled Hudson Taylor empower you to reach the unreachable in your community today!