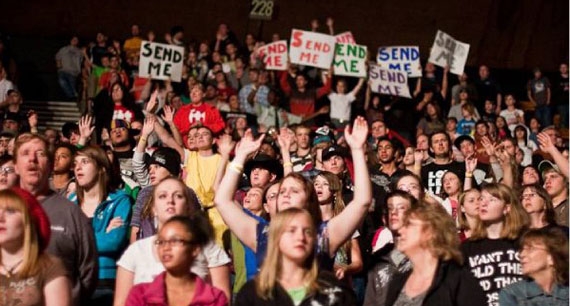 There’s a lot of talk in denominational leadership circles today about the need for more church plants and a stronger effort put toward church revitalization. I fully agree. We need more and stronger churches!

As a former church planter myself, I see the need for strong Gospel Advancing, disciple-multiplying ministries within reach of every person in every neighborhood! Church planting and revitalization is a must!

But it seems as though, while church planting/revitalization plans are ramping up with these denoms, the focus on teenagers and youth ministries is ramping down. I talk to more and more people who are seeing less and less full-time youth leaders in their areas. Many young, hungry leaders are moving straight toward church planting and avoiding youth ministry altogether.

But, if you miss teenagers, you miss the movement.

Many churches are turning to a family ministry approach that may include teenagers, but doesn’t focus on them. These churches rightly embrace the truth that discipleship of teenagers is first and foremost their parents’ responsibility. But they wrongly diagnose the reality that most of the teenagers we should be seeking to reach have parents who are lost or too spiritually immature to effectively disciple their own teens.

Teenagers in many of these churches sense this degradation of youth ministry and, over time, quietly stop attending. These youth groups dwindle in numbers, momentum and spiritual vitality as a result. Many end up looking more like a small group than a youth group.

Here are 4 reasons why teenagers are crucial to launching a movement:

“Remember, dear brothers and sisters, that few of you were wise in the world’s eyes or powerful or wealthy when God called you. Instead, God chose things the world considers foolish in order to shame those who think they are wise. And he chose things that are powerless to shame those who are powerful. God chose things despised by the world, things counted as nothing at all, and used them to bring to nothing what the world considers important. As a result, no one can ever boast in the presence of God.” 1 Corinthians 1:26-29

God loves to use foolish things for his glorious purposes. More often than not, he chooses to use those who are too poor, too broken, too young, or too whatever, to get his most important work done. Why? So that “no one can ever boast in the presence of God.”

Scan your Biblical and church history for proof of God’s penchant toward the unlikely and young:

On and on the list goes. God loves to use the unlikely to accomplish the unbelievable!

2. Teenagers are far less prone to institutionalization than adults.

“I know your deeds, your hard work and your perseverance. I know that you cannot tolerate wicked people, that you have tested those who claim to be apostles but are not, and have found them false. You have persevered and have endured hardships for my name, and have not grown weary. Yet I hold this against you: You have forsaken the love you had at first. Consider how far you have fallen! Repent and do the things you did at first.” Revelation 2:2-5

As a former construction worker I can tell you this, concrete hardens pretty quickly. And, once it hardens, it’s a lot harder to deal with. Instead of using a trowel, you need a jackhammer and a wheel barrow.

Like wet cement, teenagers are easy to pour and shape. As long as the forms are set well, these teenagers can become the foundation for a Gospel Advancing movement.

3. When teenagers embrace a cause major social change can happen.

In his classic book, Dedication and Leadership, Douglas Hyde describes why teenagers were key to the acceleration of the Communist movement in the 1940’s through the 1960’s. He writes, “Youth is a period of idealism. The Communists attract young people by appealing directly to that idealism. Too often, others have failed either to appeal to it or to use it and they are the losers as a consequence. We have no cause to complain if, having neglected the idealism of youth, we see others come along, take it, use and it and harness it to their cause-and against our own.”

It wasn’t just true of the Communist movement 70 years ago. It’s true of movements today, like the campaigns to stop human trafficking, eradicate poverty and slow down climate change. Teenagers are leading the way in all of these social causes and countless more.

At the age of 15, Greta Thunberg started a climate strike in Sweden that has since engaged tens of millions of teenagers and adults around the world. She even appeared before the United Nations Climate Change Conference to speak on behalf of the next generation.

Regardless of what you think of her cause, don’t miss the point. A 15 year old girl triggered massive social churn and change by relentlessly championing a cause.

Teenagers who embrace the advancement of the Gospel as the ultimate cause can bring about massive change as well. Want proof? When Jesus charged his followers to “go and make disciples” in Matthew 28:19, many, if not most of them were teenagers. In Matthew 17:24-27 Jesus and the 12 disciples went into Capernaum, but only Peter and Jesus paid the Temple Tax. According to Exodus 30:14 this tax was only for those 20 years of age and older.

That means most of the disciples were teenagers at the time. And Jesus gave his “youth group” the ultimate cause to champion, to make disciples in every corner of the world.

That’s why at Dare 2 Share, we call “The Great Commission” by a different name. We call it “The Cause.” Get your teenagers to embrace this cause as their own and they will shake the world for Christ!

4. Teenagers come to Christ quicker and spread the Gospel faster than adults.

Almost 80% of those who trust in Jesus as their Savior do so by the age of 18. The average teenager has at least 425 online and face-to-face friends. That means that, not only are teenagers far more likely to put their faith in Jesus than adults, but these teenagers can use their social media channels to rapidly spread the Gospel of Jesus to their friends!

I’ve seen this happen at our Dare 2 Share events again and again. During all of our events we have them take out their phones, open up their Life in 6 Words app and send a “Quickstarter” social media slide that asks questions that range from “How may I pray for you?” to “If you were to ask God one question what would it be?” These kinds of questions have been used to engage tens of thousands of Gospel conversations over the years. Why does it work so well? Because teenagers know how to spread a message they are passionate about quickly online!

Teenagers can use TikTok, Instagram, Snap Chat and Facebook as tools to rapidly advance the Good News of Jesus to their peer groups. Think of it this way, if ten million teenagers could be mobilized to share the Gospel using their social media channels and each was able to reach 100 people with the Gospel message between their middle school and high school years, then all one billion teenagers worldwide could hear the Gospel from a friend!