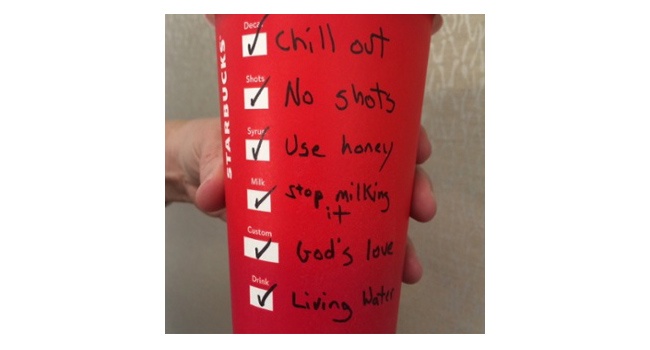 “Live wisely among those who are not believers, and make the most of every opportunity. Let your conversation be gracious and attractivetraining I happened to be holding a Venti-sized red cup full of delicious Starbucks coffee. One youth leader looked at it with feigned disgust and said, “Nice Satan sipper.”

He, of course, was referring to the controversy whipped up by an Arizona evangelist who recently filmed on an online rant about Starbucks trying to stamp out Christmas by removing Holiday symbols from their red coffee cups. His video has been seen millions of times and circulated around the internet by countless “the sky is falling” Chicken littles (as long as the chicken is from Christian owned Chick Fil A that is!) Since the release of this video rant, a caffeinated controversy has spilled over to Twitter, Instagram and coffee shops across America.

While I believe that the vast majority of Christians couldn’t give a holy hoot about whether or not Starbucks puts snowflakes on their coffee cups it only takes a vocal minority to make Christians look like a bunch of spoiled, rotten Bible brats. Quite honestly it’s embarassing and, I believe, making it harder to reach unbelievers with the Gospel message.

Jesus told his followers in Matthew 5: 43-45, “You have heard the law that says, ‘Love your neighbor’ But I say, love your enemies! Pray for those who persecute you! In that way, you will be acting as true children of your Father in heaven.” This means that even if the executives at Starbucks were declaring an outright war on Christmas and Christians we should love and pray for them instead of deride and protest them!

How about we demonstrate the love of God to our baristas by smiling big and tipping even bigger this Christmas season? How about we use this goofy tempest-in-a-coffee-cup controversy as a way to bring the true message of Jesus up with non believers? How about we chill out?

America is not going to be won over by angry Christians holding on to the strands of “the good old days” when this country and the businesses in it were much more in line with Biblical values. It’s not even going to be won over by political action and “getting the right people in office.” The only way this nation is going to truly be won is through God’s people praying passionately (1 Timothy 2:1-8), living differently (Titus 2:11-14), loving authentically (John 13:35) and sharing the good news of Jesus humbly…especially with those who disagree with them (Colossians 4:4-6.)

Let’s put that in our red cups and drink it!