Do you have the Batman or Superman view of Jesus? 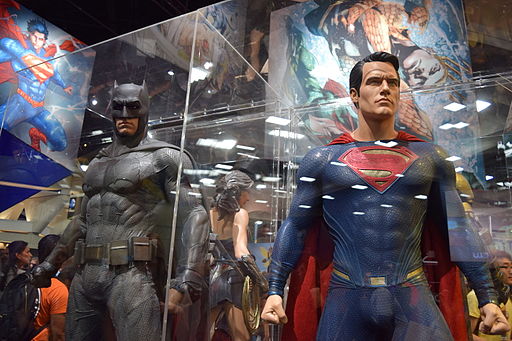 The Deity and Humanity of Jesus can be tricky theological subjects. From the time Jesus ascended into the clouds there have been differing opinions about just who Jesus actually was. Even today there are two prevalent views of Jesus that pervade the landscape. To put in another way, some have a Superman view of Jesus and others have a Batman view. When I share the Gospel with teenagers in my mostly unchurched city of Denver many tend toward a Batman view. They believe Jesus, like Bruce Wayne, was at his core a man, an exceptional man, but just a man nonetheless. Sure, they respect him. They think he was a good guy who fought off evil and rescued those who were in trouble. They knew he was somewhat rogue, like The Dark Knight, and was eventually crucified for it. But, at the end of the day, they see him as a mere man who happened to have a powerful utility belt full of tools, tricks and truth.

The problem with this view of Jesus is that, while it holds up the humanity of Jesus, it completely eradicates his deity. But these verses from Scripture obliterate this one-sided view of Jesus like the Batmobile chews up asphalt,

“The Son is the radiance of God’s glory and the exact representation of his being, sustaining all things by his powerful word. After he had provided purification for sins, he sat down at the right hand of the Majesty in heaven.“  Hebrews 1:3

“The Son is the image of the invisible God, the firstborn over all creation. For in him all things were created: things in heaven and on earth, visible and invisible, whether thrones or powers or rulers or authorities; all things have been created through him and for him. He is before all things, and in him all things hold together. And he is the head of the body, the church; he is the beginning and the firstborn from among the dead, so that in everything he might have the supremacy. For God was pleased to have all his fullness dwell in him.”  Colossians 1:15-19

Jesus was, is and always will be fully God. That’s where the Batman theory falls short. But the Superman view falls grossly short too and, sadly, many well-meaning Christians sometimes default to this view.

This can best be expressed by a passage from Kill Bill: Vol. 2 where the evil Bill rants, “Now, a staple of the superhero mythology is, there’s the superhero and there’s the alter ego. Batman is actually Bruce Wayne, Spider-Man is actually Peter Parker. When that character wakes up in the morning, he’s Peter Parker. He has to put on a costume to become Spider-Man. And it is in that characteristic Superman stands alone. Superman didn’t become Superman. Superman was born Superman. When Superman wakes up in the morning, he’s Superman. His alter ego is Clark Kent. His outfit with the big red ‘S’, that’s the blanket he was wrapped in as a baby when the Kents found him. Those are his clothes. What Kent wears – the glasses, the business suit – that’s the costume. That’s the costume Superman wears to blend in with us. Clark Kent is how Superman views us. And what are the characteristics of Clark Kent. He’s weak… he’s unsure of himself… he’s a coward. Clark Kent is Superman’s critique on the whole human race.”

Far too many view Jesus as a kind of Superman. They rightly believe that He is fully God but they subtly diminish his humanity. In a way they view him as God dressing up as a Clark-Kent-type-human for a short time, rather than being fully and truly human himself.

As early as the 2nd Century there were those who espoused this view. This heresy was called Docetism. It is the belief that Jesus was fully God but only seemed to be human.

Maybe these early followers had a hard time calling Jesus fully divine and fully human because it struck them as disrespectful to call God a human. So they said that he only seemed to be human. But, if you rob Jesus of his humanity you rob him of his majesty.

Here’s how Philippians 2:5-8 puts it, “In your relationships with one another, have the same mindset as Christ Jesus: Who, being in very nature God, did not consider equality with God something to be used to his own advantage; rather, he made himself nothing by taking the very natureof a servant, being made in human likeness. And being found in appearance as a man, he humbled himself by becoming obedient to death—even death on a cross! Therefore God exalted him to the highest place and gave him the name that is above every name, that at the name of Jesus every knee should bow, in heaven and on earth and under the earth, and every tongue acknowledge that Jesus Christ is Lord, to the glory of God the Father.”

Especially focus on the phrase, “therefore God exalted him to the highest place….”  Whenever you see the word “therefore” ask yourself, “What is that there for?” The answer in this passage is clear. Because Jesus humbled himself and became fully human (while still being fully divine), God the Father exalted him to become the King of the universe! So, again, if you diminish his humanity you diminish his majesty.

These Scriptures make it crystal clear that both the Superman view of Jesus (God dressed up as human) and the Batman view (an exceptional human but not God) are both wrong.

So what’s the best view of Jesus? (Don’t worry I’m not going to suggest Aquaman!) The Biblical view is that Jesus was and is a whole different kind of superhero. He was fully God and fully human but he chose not to use his “superpowers” as God (even though he could have because he was/is the 2nd Person of the Trinity!)

Instead Jesus lived in full dependence on the 3rd Person of the Trinity who fueled and focused his every move (Luke 4:1-14). The things he spoke he spoke by the power of the Spirit (John 3:34). Even the miracles he did he did by the power of the Spirit. As Acts 2:22 makes crystal clear, “Jesus of Nazareth was a man accredited by God to you by miracles, wonders and signs, which God did among you through him, as you yourselves know.” It was God the Father (through the Holy Spirit) who did the miracles through Jesus.

Could of Jesus done the miracles himself? Of course he could have because he was/is fully God! But he chose not to use his “superpowers” and instead allow God to do those miracles through him! Another way I like to put it is that Jesus is fully human and fully God but chose to live fully as a human who was fully dependent on God.

Why is this important? Because as 1 John 2:6 commands us, “Whoever claims to live in him must live as Jesus did.” This may seem impossible if we have the Superman view of Jesus. After all, we’re only human and he is God. It may seem impossible if we have the Batman view of Jesus because we may not feel like exceptional humans with a cool utility belt of tricks, tools and truth.

But, with the 3rd view suddenly the impossible becomes accessible! If Jesus was living in dependence on the Spirit, choosing not to use his divine superpowers, then we can live in dependence on the same Holy Spirit who dwells inside us. The result? We can walk like Jesus walked and do what Jesus did! As Jesus himself said in John 14:12, “Very truly I tell you, whoever believes in me will do the works I have been doing, and they will do even greater things than these, because I am going to the Father.”

Let that soak in for a moment. Jesus said we will do “even greater things” than he did. And, collectively we have. Over the last 2,000 years we’ve seen countless more miracles (only 37 recorded miracles were done through Jesus in the four Gospels), taken the Good News farther, reached more people and transformed more lives than Jesus did during his short 33 years on earth!

Eat your heart out Superman!

*For more indepth teaching on the humanity of Jesus check out this excellent article by Dr. Dann Spader, founder of Sonlife.