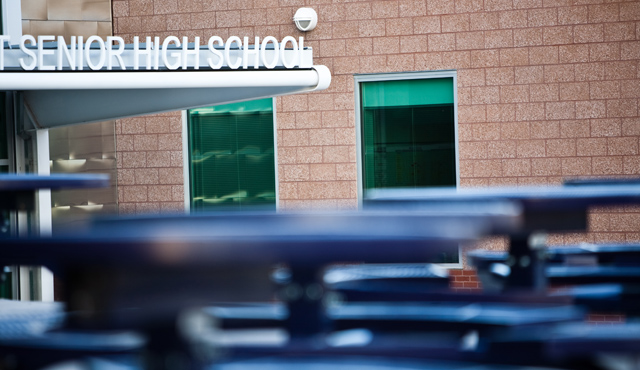 In just eighty seconds it was all over. But those seconds were packed with utter horror for the students, teachers and administrators of Arapahoe High School in Centennial, Colorado. Karl Pierson, in a pre-planned attack, entered the school armed with a pump-action shotgun, three Molotov cocktails, a machete and anunresolved vendetta against a debate coach.

Less than two minutes later 17 year old student Claire Davis struggled for her life as a victim of a close range shot to the head, Karl Pierson lay dead in the corner of the library and a student body was reeling in fear and shock over what had just transpired.

Thanks to the quick actions of an armed deputy sheriff who was working at the school this tragedy didn’t have time to escalate toward Columbine proportions. The deputy sheriff, a school security officer and two administrators ran down the hallways warning everyone that a shooting was in progress. These adults ran into the fray and lives were saved as a result. It was probably these heroic actions that caused Karl Pierson to abort his plan and take his own life.

Please pray for Claire as she continues to struggle for her life. Also pray for the student body at Arapahoe High School as they try to make sense of this senseless tragedy.

Arapahoe High School is only a 30 minute drive from the Dare 2 Share offices where I work. Fourteen years ago it was another too-close-for-comfort school shooting that changed my world forever.

On April 20th, 1999 the Columbine School massacre shocked the nation and devastated the city where I was born and raised. As a result I resigned from being a preaching pastor at a growing, thriving church in a suburb of Denver to pursue mobilizing teenagers with the gospel full-time.

The question that haunted me in the days after Columbine was would the outcome have been different if the Christian teenagers at that school had been mobilized to reach every student on their campus with the gospel of Jesus Christ? To be honest I don’t know the answer to that question. All I know is that the gospel of Jesus Christ can change the darkest of hearts and transform the worst of situations.

Fourteen years ago I sat in the FBI training center in Quantico, Virginia as a top level FBI official lectured a small group of national youth ministry leaders and told us how the gospel is the real game changer for preventing crime in America. To our surprise, he told us that the churches and ministries represented in that small room had more power than all of the government forces combined to turn the tide of crime and stop tragedies like Columbine from unfolding in the future.

Even though this man could have lost his job for his explicitly Christian statements he made it clear that the problem with America’s youth was not merely sociological, psychological or moral. He told us that he believed the primary problem was spiritual and that the primary solution was the gospel of Jesus Christ.

I sat in awe as this government official challenged us to keep praying for this nation and keep mobilizing teenagers to reach every teenager at their schools with the gospel of Jesus Christ. We left the FBI training center feeling commissioned for a cause, to raise up an army of teenaged change agents who can transform their campuses from the inside out.

I fully understand that this latest school shooting will ignite even more debates about gun control. Some will say use it as yet another reason to enact and enforce stricter gun control laws. Others will point to the fact that it was an armed deputy sheriff that helped to bring the shooting to a stop sooner rather than later.

I want to share with you a 3 part strategy to change our nation’s schools from the inside out and, in the process, help to avert future school shootings. It all revolves around Christian parents, youth leaders, teachers and coaches mobilizing teenagers for gospel-advancing action at their schools.

In short these action steps are equipping teenagers to pray with passion, pursue with love and persuade with truth.

What if there was a group of Christian teenagers, bolstered by a network of adults, relentlessly praying for revival at their schools? What if these students were scouring the yearbook praying specifically for every teenager in every class? What if entire families, churches, small groups and youth groups adopted the schools closest to them to pray for on a consistent basis? (By the way you can do just that here.)

Call me simplistic but I’m fully convinced that there is no force like a true spiritual awakening to avert drug use, bullying and even school shootings. Does that mean that praying is the only action we take? Of course not! But it is the first and most important action that we as Christians take.

We need to mobilize our teenagers to love the broken, bullied and bad. We need to equip them to sit at different cafeteria tables and build deep relationships with other teenagers, starting with those who are the most dangerous, most sinful and most hurting.

If we really want our young people to be Christ-like we must equip them to live like Christ. And Jesus consistently broke social norms to build relationships with the broken (like the woman at the well), the bullied (like the 10 lepers) and the bad (like the thief on the cross.)

Too many times we as Christians are known for what we are against instead of what we are for. And, more than anything else, we must be for loving each other and the lost. As Christian teenagers are equipped and unleashed to show God’s love to a hurting world rays of divine hope will illuminate darkened hearts and darkened schools.

Teenagers who are praying for their schools, pursuing relationships among their peers with the love of God are ready to persuade them all with the good news of Jesus. They can share with their classmates and teammates the gospel message with a gentle, yet powerful persuasion that comes from hearts filled with the Holy Spirit.

If your teenagers don’t know how to share their faith they can get free resources here or download the free Dare 2 Share app. This is a simple way to equip your teens to pray with passion, pursue with love and persuade with truth.

In light of the most recent shooting at Arapahoe High School I challenge you to do something to change the tide. Let’s remember that, in the words of a former FBI official at Quantico, we hold the keys to transforming the next generation and changing the trends. Let’s equip teenagers to pray with passion, pursue with love and persuade with truth until every teenager in this nation hears the good news from a friend they know and trust.

And let’s not forget to pray for Claire Davis and her family as well as the student body of Arapahoe High School during this time. They need them now more than ever.